﻿ ﻿
What an amazing run in an amazing little town! I wasn't too sure what to expect from Salida, but instantly fell in love with the mountain town. Race day brought about gorgeous weather, a typical Colorado spring day. Temperatures were in the 50s with the sun shining brightly upon us as we took off along the course. The first 2 miles were mostly on gravel road, not the most impressive 2 miles for a trail race, but it was a good chance to warm up the legs a bit. I cramped up pretty bad around 1.5 miles, a seemingly common problem I've been having over the past couple months if I don't focus on my breathing. After being reduced to a slow crawl for half a mile to focus on my breathing the cramp was gone and Dan and I were heading up.
After the road portion the course was primarily single track with a section of jeep trail, all of which was gorgeous! It was wonderful to feel the sun on your face and be surrounded by big moutains. It was also great to get to race in my 101s again and feel the dirt beneath my feet. There was only one small section where it got pretty muddy with a few small snow patches. I'm definitely feeling the effects of an extra 15 lbs on my body now though, I just don't have the speed I used to have. After watching as many people as I did take pretty hard tumbles I was much more cautious than usual on the downhills. Only a couple more months until I'll be able to fly downhill like I know I'm capable of. Of course that will also mean less runs Dan and I will have together, but we'll take what we can get if it means running on days like this! I would have liked to have finished with a better time, and I know we're capable of better, but at 7 1/2 months I guess I'm just happy to have been out on a trail race course, so no complaining from me! 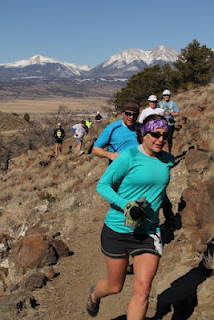 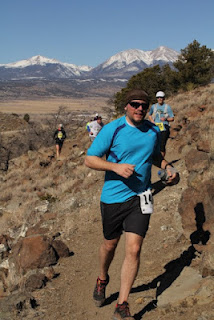