I suppose I should get to writing a few things down about this race before I totally forget them.

The week leading up to the race I actually tapered pretty appropriately, thanks Sandra for making me run with you and not go a bit further like I had originally planned. I wrote up some splits, printed a elevation profile to sleep on...it worked in college before exams and I'm fairly certain I remember learning osmosis is a real thing. So in my mind I was actually more ready than my lack of long runs suggested. Really I had no idea how the day would go, I just hadn't really tested myself yet.

The morning of the race it was cold, drizzly and foggy. Since my oh so accurate weather app called for a slight chance of rain and high of 63 I figured it would burn off. I'd be too hot in my shell so I left it in my 25 mile drop bag and had a little chat with Mother Nature. It was a bit strange without the 25ers lining up at the same time so I felt like I was starting way too far forward. But when we started my time was right where I wanted it. But I felt off. I still can't really place it but by the time I got to the top of Tower I could just feel things weren't clicking. I mean it was freezing cold, raining, I couldn't work my bottles to get calories or fluids, I missed the boys and my legs felt dead. Really after that about all I remember from that first lap is my drop bag missing from Horsetooth, normally not a big deal but it had my pump. They finally found it in someone's car and I was forever grateful! Then as I fumbled trying to assemble and pump around mile 19 I got passed by what felt like 20 women and all I could think was this has to be like child birth. So miserable you forget the whole thing and go back for more. I contemplated dropping, but I couldn't have two DNFs in a row and really at worst it was going to take me what 6 more hours.

I came into the turn-around, dropped my pump and milk, picked up my shell because it was still drizzly and freezing up higher and immediately took off. I knew the other girls were only a few minutes ahead of me, but I didn't care. I honestly told myself this lap is about having fun and feeling good. So I did just that. I started sucking down calories, VFuel in my water, and since my hands were starting to swell I took a couple Nuuns and immediately felt better...shock calories and electrolytes work when you bonk.

And then as I made that first climb out of the start/finish I finally started feeling strong again. I still didn't care what place I was in or what my time was I just kept hiking and running and feeling better with each step. I made it up that first climb and down to Arthur's pretty easily. When its not hot out that section is so much easier. Then a tough climb back up to Towers and I think I still have nightmares about this section from the first year I ran it. But I still just kept feeling strong. I think I passed one or two girls on the way back down to Horsetooth, but I really wasn't paying attention. At Horsetooth Sandra was leaving just as I came in the the volunteers started telling me the top 4 girls were just ahead of me. I laughed saying I wasn't racing and they just looked at me and said well we want to see a race and not being one to back down to a challenge I figured lets see what I've got. Afterall it was only 10 miles or so left. I took off at a good pace along the flat section and did my best to power up that last climb. I knew 10 miles that late in the race was still a long ways so I didn't try to overdo it. Looking back I had the legs so I should have pushed this climb a bit harder, but hindsight is always 20/20.

Throughout the whole second lap I tried to stay really steady with taking in as much VFuel and Nuun as I could and I really think that helped my climbing. My stomach also felt surprisingly good. The first lap my bottles were filled with EFS and my stomach wasn't terrible but it wasn't great either. Once I had gotten through all the EFS and was onto just VFuel I did feel incredibly better. One of my nutrition goals this year was to try to stick to one type of sugar throughout a race. My EFS on the first lap was pre-mixed with Heed and so I had multiple sugars going on. I can't say for sure that this is the reason my stomach felt good, but I'll definitely stick with this plan for Leadville.

After I left Towers for the last time I knew I had to push. I felt like I knew every step of the course...and really at this point I probably do. Looking back at my splits I think I still held back here a bit more than I was capable of, but I was still pushing pretty hard. As I started up that last mini climb shortly after you turn off Tower Road I saw I was catching up to Sandra. Shortly after the climb I passed her, wished her well and figured she would be chasing me down the whole rest of the way. I zigzagged through the last few switchbacks hoping to get a glance of the next woman. I could see a couple people ahead but couldn't really tell if any were women. At this point though I was so done. I knew it was about 3 more miles to the finish and I was so ready to be done. So I just kept pushing. I finally checked my watch, for the first time the entire second lap and while at this point I was anticipating a finish around 11:30 I was surprised to see a 9:49 on my watch. I rubbed the screen thinking that might change the time, did a quick calculation and realized that I might just have a shot at a PR after all. I quickly covered my watch back up and just went back to running. The meadows was pretty uneventful, I could see a couple people ahead of me and while I was closing the gap I knew I needed another few miles to over take them. Finally I popped out onto the road and made the quick turn into the parking lot and through the finishers shoot.

I finished with a PR of 10:21, but what I was most proud of was coming back from a bonk and making up all my PR time (24 minutes) on the second lap. My first lap was exactly the same time as it had been the last time I ran which meant I took almost a minute off per mile in the second half of a 50. That's pretty huge for me and at least shows I'm making progress in running a steadier race. Probably the biggest frustration was finishing 5:30 out of first! Seriously the top 4 women were withing less than 6 minutes of each other. Its a bummer to miss the podium, but this wasn't my goal race and I need to be sure to remind myself it's not just about the podium...well except for the Leadville Marathon next month, that is ALL about the podium. Overall I was pretty happy with the race. There's a lot of room for improvement and I learned a lot, but still finished pretty respectfully. Plus I had fun despite the dreary weather and finished with a smile. The hardest part really was not having the little grommies there to greet me at the finish. It was definitely too cold to have them out, but its tough not seeing their happy faces at the finish line. 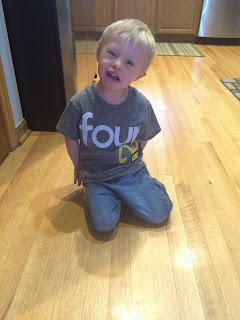 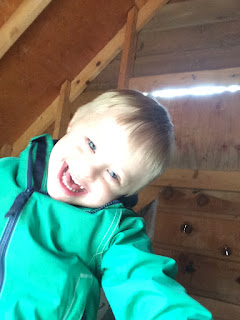 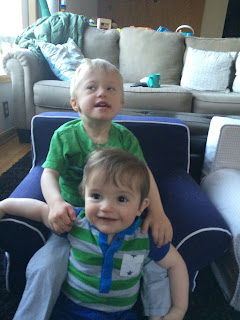