Things were pretty uneventful leading up to North Fork. Uneventful in terms of no major life craziness, but also no major training. I felt like the fitness I had in April had vanished as my mileage dwindled and the quality of my training just didn't seem to be there. Life has been crazy the past few weeks so I was just doing what I could. And after a dismal Quad Rock I had mixed emotions. Was I ready for a flat, fast race? Would I have any hope in my legs turning over? Was this my chance at redemption? All spring this has sort of been my focus race so I was kind of excited for it. And I know literally every twist and turn of that course which makes knowing how to run the race a lot easier.

I set a somewhat ambitious goal for myself of breaking 9 hr. It was mostly arbitrary but I just really want a 50 mile PR to start with an 8. I know its silly, but whatever motivates you right? So that was my goal...I had zero idea if it was attainable or not. I sketched out some splits, crossed my fingers and decided to hope for the best.


In terms of 50s North Fork has a late start 7:00 am. With the promise of a HOT day and afternoon thunderstorms I was eager to start as early as possible. Eventually the 'gun' went off and away we went running past the river. Thankfully it was actually pretty bottlenecked at this point which forced me to keep an easy pace. As soon as we turned onto the singletrack though things evened out and I was able to get into a groove. After about 2 miles I was basically alone to run my own race. I cruised easily up Buck Gulch and then along to Homestead. For some reason I have Miller Gulch built up in my head as this terrible trail so I wanted to get that over with. Before I knew it I was back at the Homestead AS (mile 10) still feeling good and keeping a decent pace. An easy cruise down Gashouse and at mile 15 I was feeling good and had probably just thrown down the best first 15 miles of my life! After a really dismal first 15 at Quad Rock I was super excited!


Next up was a run around Green Mountain which I was looking forward to. Its shaded so I knew it wouldn't be too hot and its a nice runnable trail. I was in and out of Meadows AS and quickly heading up the trail. I passed a couple women right away and then was back on my own, feeling stronger with each step. I hit the top and really started running now. My warm-up is usually 20 miles so I was feeling great. I passed one guy, who I would leap frog with a bit, and he was amazed asking if I was just starting to push it because I looked so fresh! Ha I thought...but yeah this is actually when I feel the best in a race.


The climb out to Rolling Creek is a long one and I knew it would be hot. I loaded up on water, nutrition and headed for the out and back. The motivation was knowing all I had to do was 5 miles out then 5 miles back and Dan would be at Meadows to run the rest with me. Cloud cover was in and out which kept the heat down a bit and made for some easy running. Rolling Creek was pretty subdued when I got there which was a bit disappointing but also really kept me moving. Since this is an out and back section I knew for the first time all race where I stood. Solidly in second. I was a good 3 miles behind the first place women and about a mile in front of third. That was enough motivation to make sure I ran a strong second half so she couldn't catch me. The highlight of my race though was probably when the lead guy passed me giving me a high five and saying you're crushing it young lady, yep young lady I was ready to take him home with me!
﻿


I was really running strong and feeling good, although a bit behind on nutrition, when I got back to Meadows. I came flying in searching for Dan but he was no where. I ran up to the table to start filling bottles and the volunteer asked what I needed. Just then I see Dan sprinting across the parking lot so I just shook my head and pointed at him saying yeah just needed him. The volunteer said you just need to get through this next brutal section and its all easy after that. I jokingly said oh this next section doesn't bother me, that's a quick one, I just want to get the Baldy climb done with. Yeah famous last words. So every time I've done the Tramway to Shinglemill climb its been early in a run or race. The first time I ran North Fork this was around mile 15-20 not 35-40. Ugh...that climb seemed to go on forever. I kept willing my hiking legs to hike faster but the grade was tough. I'm better at power hiking steep climbs, this was steep enough I couldn't run the whole thing, but gradual enough that power hiking wasn't working well so I tried to just keep a running pace.


Finally I hit Shinglemill AS and welcoming me with open arms was Nick! I haven't seen him in ages and after running most of the race solo it was fun to finally see a familiar face. I knew I had to keep moving though so off Dan and I went...one climb left...no big deal. We hit the Buffalo Creek AS and I wanted out of there fast. But bottle filling seemed to be taking forever. Dan had my last bottle and I figured he was 30 sec behind me so I said I'm heading out you'll catch me in a min. But I kept looking back and not seeing him. At this point I was getting worried he really wouldn't catch up. I was still actually running stronger than I thought I would be and he hadn't done a long run in quite awhile. After about 5 minutes though he came not-so-cheerily running right up with my last bottle. And before I knew it I was cheering at the site of the large rock outcrop near the top. That's always my signal that you're just about there.


After that it was a pretty easy cruise to the finish. I hadn't seen any site of the woman behind me so I was fairly confident I would hold onto second. I still wanted a strong finish though so I tried to maintain as much of a run as possible. I knew at this point unless I somehow managed to pull off sub-7 min miles for the last 4.5 miles I wasn't going to break 9. I knew it would be close, but it just wasn't quite there. I did manage a sub-8 for the last flat mile which I was pretty stoked on and crossed the finish line running strong with no major injuries or battle scars for 2nd woman and 10th overall. My first legit top 10 overall and while its not a crazy deep field I was still pretty excited about that.


Overall North Fork was a great race. I executed fairly well, better than I have been lately, my legs remembered how to run somewhat fast, no injuries or real soreness, and a super fun time. This is such a great race, well put on and tons of fun. I totally recommend this one! 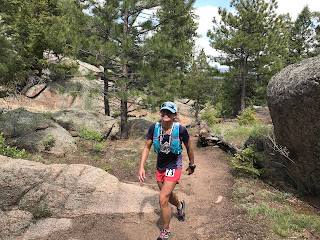