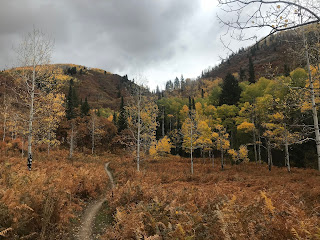 Its shoulder season now which means all anyone can think about is getting ready for ski season. For the first time in a long time its all I can think about as well. But I'll admit as excited as I am for ski season I'm also nervous about my  training. While I'm not one to post my mileage or compare it to others I do compare it to myself. Letting go of keeping mileage where I think it needs to be is definitely going to be a struggle. Maybe once the snow flies I'll be signing a different story.

In preparation for the snow we've outfitted ourselves with split boards, new bindings, skins and from last year I still have a new solid board and new boots! I'm excited to start skinning...weird that I'm almost more excited for going up than going down! I know it works as training and something tells me my fitness will be even better come mud season next spring, but its the unknown that worries me. 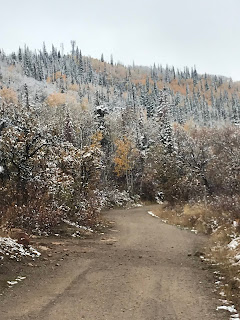 In the meantime I'm soaking up as much trail time as I can! Every day on the trails has been beautiful...watching the seasons change. After last weekends snow there aren't many leaves yet, but I'm watching the snow line grow up higher. I'm finally starting to see some real progress and with each run I seem to be getting faster and faster. This past week I've PRd most of my regular trails and feel much more like my old running self.

I've also changed the minimal strength I was doing to a focus on snowboarding. Its still focused on core and legs but more dynamic movements. It definitely kicked my butt and gives me confidence that I'll be in even better shape next spring. Its also getting me excited about strength again. It feels like its been a long time since I've had that good sore feeling.

I'm not sure when the trails will be fully covered in snow...though I suspect it will happen within the next week. And I'm not sure I'll be mentally prepared for it, but there's only one way to find out...jump right in. I'm also super excited to get out with the boys. We got them their skis for the winter, they're signed up for lessons and at least as excited as I am for them to get out there. 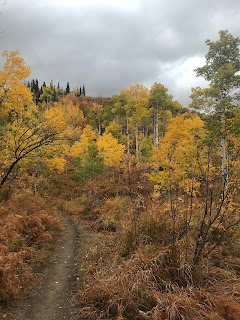