Its no surprise that getting my long runs and any real training has been difficult at best since Ellie came along. So I decided to go back to prioritizing my runs and making my long runs happen. But more than that I decided I need to take a few steps back. Reality is where I'm at now fitness-wise is not where I was at even a year ago. For awhile now I haven't been able to accept that. I should just be able to go out for a 20+ mile run whenever. But that's not the case. I'm sure I could get through it, but it wouldn't be pretty and I would pay for it later. So instead of forcing those runs I know I shouldn't be doing anyways I took a step back and decided that each week would just be a little more than the week before. It was so hard to acknowledge this, but once I did I felt like I was moving forward for the first time in months.

All I can do or expect from myself right now is the best I can do today. Not what I think I should be doing. Not how fast or how far I think or want to be running. But the best I can in this moment. Right now. Turns out its also a lot less stressful. I'm still not sure how I'll get to the start of Run Rabbit this year, but it sure seems a lot more possible.

Slowly but surely I'm building back the consistency. I'm getting in a longer run each week. Of course we've also been getting some of the best snow in years. Which is also a bit funny because for as much as I think I'm out of shape right now I'm nowhere near as tired as I used to be after a day riding powder. I've lost track of how many days I've had on the mountain this year, but its been more than the last 6 years combined I'm pretty sure.

I had an awesome couple days at a AASI Women's Summit Clinic as well. It was fun riding with a group of women who were absolutely shredding it hardcore. Not to often you see a group of that amazing of women riders. It was also hugely inspiring to watch some of the women from the national team. So now on top of my running I'm even more pumped to improve my riding. Goodness so many things to do and so little time..little forward progress and continue to be the best I can be on any given day. That's all I can do. 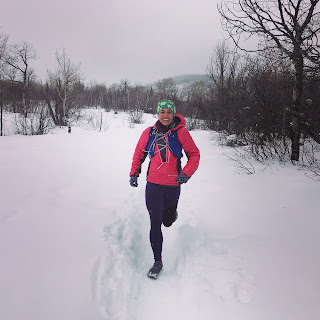