A little over 2 1/2 years ago Dan looked at me one day and asked if I wanted to go for a run around the neighborhood with him. He was quick to tell me not to get too excited because we wouldn't be going far or fast and he probably wouldn't stick with it. We hiked quite a bit of the big hill, but it was a start. A few days later we were running at some new trails and before he knew it we were on a 7 mile run on the beach in Cali. I had just signed up for my first ultra when Dan decided it would be better to join me in running than to try to fight it.

Now hiking the hills is reserved for Hope Pass. He has 3 ultras and 4 marathons under his belt. I'd say an incredibly successful 2 1/2 years. Naturally there has been a pretty steep learning curve to make up for the years of experience others have had. At the Silver Rush 50 this year I saw Dan coming in around mile 24 and he looked great charging the hill up to the aid station. He was ahead of his splits and everything seemed to be going well. Well...it was a long last 8 mile downhill stretch. This was his first 50 and with a runnable course its easy to go out too fast and blowup. The blowup was beginning when I saw him around mile 35ish. He pushed through and finished in terrible conditions. It may not have been the time he wanted or was capable of, but the lessons learned were invaluable. I see a lot of Dan in James in this respect. No point in trying if you're not going to go out hard. You may crash and burn in the end, but at least you had fun getting there.

A couple weekends ago Dan's long season finally came to an end with his first road marathon, Denver Rock n' Roll, where he put up a very solid performance. It was evident he's actually starting to learn from his earlier mistakes and was able to run a pretty steady race. This season he took over 45 minutes off his Leadville marathon time and a similar PR at the Salida marathon. I know next season holds some big runs for Dan and as long as he stays healthy he's going to make some great strides.

I've had some fun times running the past
couple weeks. My legs are feeling fresh, the weather is finally getting cool, so it's that perfect combination that leads to great running right before winter sets in, the trails are covered in snow and ice and it's dark all the time. Apex is still closed for flood damage so I've been mixing up the trails a bit more. I'm still not quite getting to the top of Falcon as fast as I would like. I need to just force myself to push through a bit more. I'd really like to at least get uner 31 min before the end of the year. I know I can do it, I just have to actually do it. I'll get there. 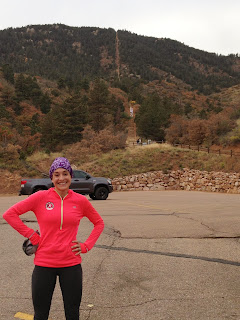 We also spent a weekend in the Springs. As soon as Dan and I got there, we dropped off James with Nana and PopPop and headed straight for the Incline. I was certainly a bit nervous as we approached it. Its definitely daunting. Dan was still recovering from the marathon so we took it easy. We made it to the top in 39:14 and could easily cut several minutes off that. Then we took the Barr Trail down. We of course forgot our headlamps in the car so the last mile was barely faster than a hike as it was pretty dark. Still fun and we were both in significantly better moods after tacking that beast. The next morning we hit up Palmer Park, which for being in the middle of the city is a pretty cool park. There are so many social trails and they all intertwine that we basically just had a fun adventure run. We got great views of Pikes and just had fun before heading to the Notre Dame game.

The game was James' first football game. We weren't planning on taking him,but the weather was amazing and Nana was begging. After a pre-game meltdown and first half nap he rebounded to clap and cheer for the whole 3rd quarter. It was a blast. 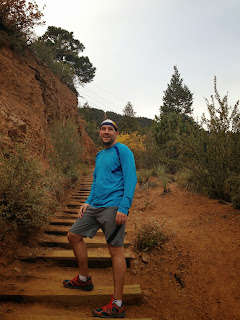 Since getting James' Sure Steps we've been working pretty consistently with him on the treadmill. I've noticed a pretty significant improvement in the consistency of his strides. He is very right leg dominant so his right step would be huge, then small left step. Working on the treadmill almost forces him to keep more even strides and it certainly helping. The longest he's gone is 5:45 which is pretty amazing for a little dude! 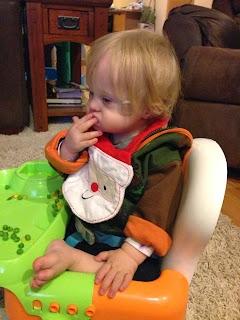 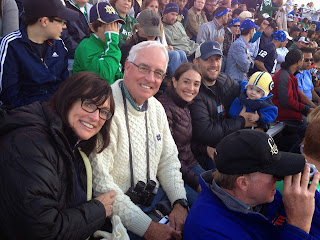 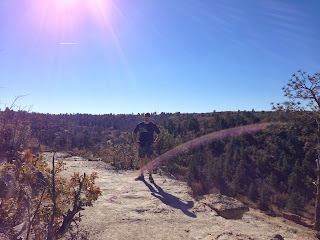 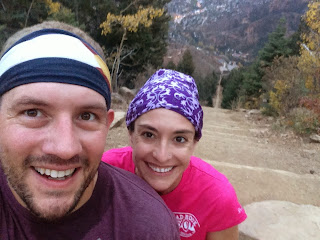 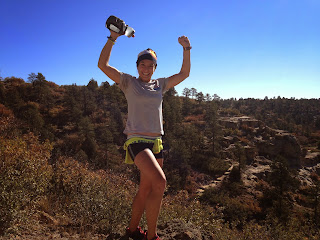 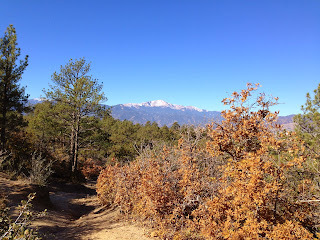