Never Too Old To Learn

This was a week about trying new things and improving my running. Dan had been seeing a physical therapist for a couple weeks and had seen significant improvement. She specializes in running which intrigued me. I've wanted to be sure the little niggles I've felt are really just that and nothing bigger. So I went in for a running evaluation. The first thing she said was "well you look like a runner". That was a good start. She filmed me running on the treadmill from several angles. The biggest things to improve on is to stop over striding and my hip and ankle strength. I've known my hips were weak, but it was interesting how she picked up on my ankle issues. Well former issues. I had my left ankle "enhanced" nearly 16 years ago. I haven't noticed any problems, but because of some residual weakness I have a bit of a heal whip. She also said the bit of pain I've been having in my calf is related to being a forefoot striker. While I've been a forefoot striker since my days as a sprinter she said I need to really be solid through my ankles and that I've been able to get away with it for shorter distances, but getting to 100s is wearing out my calves. So good to know its nothing really and with a few exercises it should be a thing of the past. The real test is if I can actually do the exercises!
I also returned to a few trails I haven't run oin quite awhile. I did a summit of Green Mountain and the Hogback at Matt-Winters. I swear Green Mountain is always out to get me. The last time I ran there I had a bout with the chiggers...this time it was so windy up top I think there were a few steps I took where I actually was blown backward. Then we went to Breck and I got to check out some new trails. I had heard good things about the Burro Trail and since it was less than a mile from our condo I decided that would be a great place to start. It turned out to be an amazing trail. The first several miles were super runnable, winding along the river on soft trails. Then you popped out onto a jeep trail with magnificent views of Quandary Peak. The way down I took it a bit slow. Burro Trail takes a turn, I think it was around 3 miles up, so I was afraid I'd miss it heading back down. Once I found the trail again it was just a fun cruise back into town.
That night Dan wanted to go out to a nice dinner to celebrate our anniversary. He even made reservations at Briar Rose for us, early so we wouldn't bother anyone with James. Well I really went out on a limb at dinner. I tried escargot, which was amazing! And ordered buffalo short ribs. Well guess who is head over heels in love with buffalo short ribs...besides me? Yep James! He went nuts for it! And it was the first thing he has ever turned down cheese for. I'm afraid we have created a monster! The whole weekend was awesome! It was so nice just to be able to run and eat and relax as a family. No chores, no responsibilities, nothing. I think everyone needs a weekend like this once in awhile.
As an added bonus I hit 1500 miles for the year this week. That means roughly 45 miles per week until the end of the year to hit 2000. I guess I have some work cut out for me. But 1500 is still more miles than I got in last year. I think I'm setting myself up well for a great 2014.
Week October 7 - 13
Miles Running: 39.0
Hours Hiking and Running: 7.5 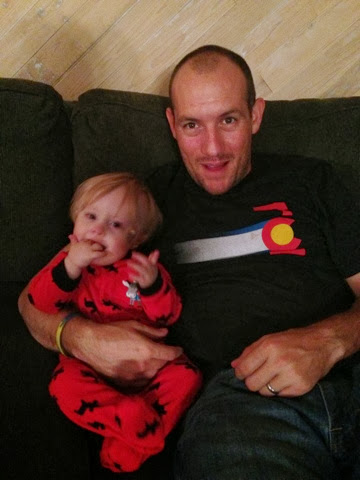 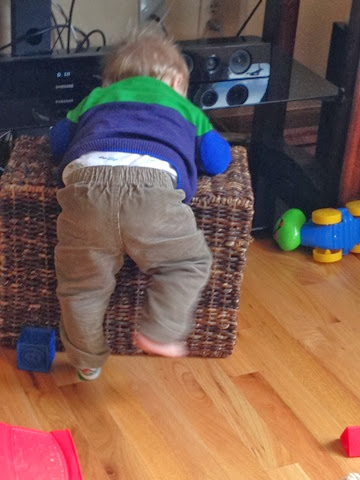 I think we have a mountain climber on our hands!
Labels: Breckenridge RDS runners trail running