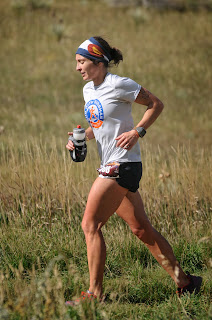 It was a crazy week leading up to the race. Bear Creek Park had flooded pretty bad so the status of the race seemed up in the air. Tuesday the RD announced course changes and said the race was a go. Amazingly they had managed to keep the integrity of the race with almost a completely new course. There would be a bit more time on the roads and bike paths, but the majority was still on trail so I was pretty happy with it. Friday I picked up my packet and again debated changing to the 50 mile, but the thought of 5 laps got the better of me and I stuck to the 50k. Then it was home for a quick ramen noodle dinner and bed.

Just before I crawled into bed I happened to be checking Facebook and saw a post from the RD...it had been raining all day and park management said we had to postpone the race. What? Was this for real? I checked the race website and shot off a quick text to Nick. Yep, it was for real. No Saturday race. They would evaluate trail conditions on Saturday and make a decision about moving the race to Sunday.

So now I had all my gear ready, I had tapered and my legs were super antsy. So I went out and did the next best thing to resting...I set a PR at Flying J, sub-8 minute miles.  My legs felt great and I knew I was ready as long as this run didn't set me back. 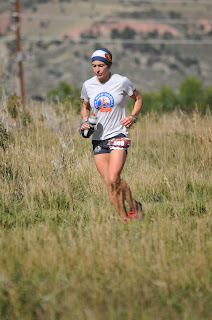 Sunday morning was chilly! I parked, hopped on the bus and en spent the next 30 minutes huddled against the side of e bathrooms trying to keep warm. Then it was go time. The 100k took off, then the 50 mile and next was our turn. The gun went off and I found myself dodging around for a good position. Luckily the trail stayed wide for awhile so for the most part you could get around people pretty quickly. Before I knew it I was passing 50 milers and had settled into 4th for the women with 2nd and 3rd only a few seconds ahead of me. We hit the river crossing pretty quick and this was the only real cluster of the day. 100kers were for good reason taking off their shoes, 50 milers were picking their routes and the 50kers didn't care and charged their way through. Then we wound our way down the bike path to Mt Carbon. I easily moved into 2nd on this climb but I knew 3rd was close and I was about 20 seconds out of first so I kept a steady charge up. As we created Mt Carbon the sun was rising in the distance and even though its not the prettiest course I've run the view was stunning. No time to think too much about it though and I hammered downhill. The first aid station was at the bottom of Mt Carbon and I just cruised through.  We made our way around a golf course, took a sharp left, up a steep, short hill and were heading back to the start/finish. I cruised through the second aid station and tried to really keep it steady as I finished that first lap. As I came into the start/finish I was feeling good. Nick was there yelling at me so I threw him my sleeves and gloves, topped off my water bottle and was heading back toward the river. I was 6 minutes ahead of my anticipated time and was a bit nervous not sure if I had gone out too fast. The 3rd place women was no where in sight and I was still less than a minute from first. The second lap was pretty similar to the first. I came in 5 minutes fast again and knew I now had a 10 minute buffer to break 4:30. 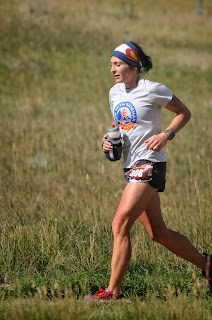 I topped off my water bottle with EFS and water and before I knew it I was back in the water. I had a bit of a niggle in my right leg and the cold water felt great. As I started back up Mt Carbon my legs started feeling increasingly heavy. The first place women was now out of sight and I was beginning to worry I would lose second. I grabbed a coke and ginger ale at the aid station and topped off my water bottle. It was really getting pretty warm and I was going through my water much faster now. But I was halfway through my last lap...almost home. I also realized that my 26.2 mile time was 3 minutes off my marathon PR and my 2nd fastest marathon time. I can't be too disappointed with that. Just that damn steep hill! I cursed as I half hiked half ran the 10 steps to the top. Still no third place in sight and I was ow pretty sure I'd hang on to second, but 4:30 was pretty much out of the question. 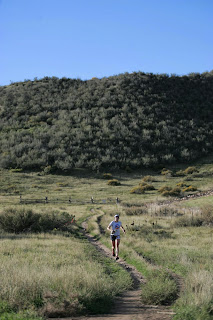 With about 1/2 mile left I saw Dan on the side of the trail and I knew I couldn't slack on the little hill up to where Dan was. I finished strong in 4:32 and as I crossed the finish the one guy said so you're the third woman? I was crushed. How did I let someone pass me? I knew third was still good, but I was still a bit upset with myself. Plus my legs were sore and I was too tired to really care. Nick grabbed me a water and a beer and I sat down on the curb to wait for Dan. After a few minutes of discussing how much I despise running fast and how running fast hurts so much more than running far, Nick came back over saying to hold tight because I might really have been second. After a few minutes of Facebook stalking to determine that the girl in first was actually running the 50 mile I was awarded my second ace trophy. Of course I tried not to think about the fact that I had gotten not just beat, but crushed by a girl just hammering the 50 mile.

My goals for the race were to run sub-4:30 and go top 3 for women. I also wanted to see if I could still run kinda fast. 4:32 and 2nd, 8th overall is pretty damn good though. Especially considering I hadn't run farther than 15 miles since Leadville and had only done one speed workout. I was left tired and sore, but also in a strange way wanting to give another go at a marathon to see how much I have improved. I know I'm running significantly better than I was a few years ago, so maybe we'll have to see about that marathon.

Overall the race was pretty great! Especially considering everything the RD was up against. A last minute course and date change and the race still went off flawlessly. The course itself wasn't my favorite, but good beer, good swag and a well organized race might mean I'll have to return for another dose! 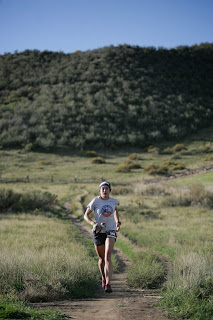 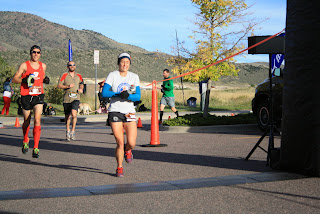 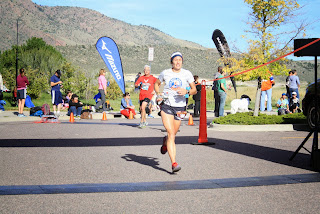