The beginning of the week was more fighting for each mile, each step forward in some cases. But with all the hardwork at the beginning the end of the week brought some amazing running! After last weekend's storm Monday brought completely snow covered trails. Since Green Mountain is pretty exposed I thought it might not be too bad... I broke trail up to my knees the whole way to the summit. Every step was a battle to continue moving forward. The snow was deep, slippery and covered in a light sun crust. Thankfully no one was around to witness such an endeavor because I'm pretty sure they would have thought this was some new kind of dance, definitely not an attempt at running. Certainly no sane or sober person could be making those moves. I'm pretty sure I actually covered more miles sideways than I did forward during that run. As much as it sucked to break trail that deep to the summit it was an amazing run. Trailblazing your way to the top of a mountain, not too bad for a days work.

Tuesday I was back at it with the hill repeats. While I don't think they ever get easier, this weeks were much better than the first time. And that was despite having a cold. I set out to do 4 repeats, maybe up to 6. On the fourth one I told myself if I run this one in under 3:05 it'll be my last. So I ran it in 2:56. Before I even had a chance to think about being done, I thought, well Rob wouldn't stop at 4 repeats. I could just hear him saying oh come on just one more, it'll be fun. And so I stepped it up this week and did 5 repeats. Never stop pushing yourself.

Thursday was awesome! Dan and I took the day off to play in the mountains. We went out to Buffalo Creek for a perfect 20 miler. It was slightly overcast and perfect running weather. Overall we just had a blast. By no means a fast 20 miler, but it was fun to have a little 4 hour date run. Some people go out to dinner, Dan and I go for long runs. Also good to get in my first 20 in awhile and feel good afterwards.
﻿

James and I flew to Wisconsin for the weekend for Parker's Baptism. I managed to get in a few runs on the Ice Age Trail which I always love. He and Parker were adorable together. I'm so excited to watch them grow up as friends. James has gotten so much stronger the past couple weeks in terms of sitting, eating, and interacting. For everyone that hadn't seen him in a couple months they were amazed at how strong he is now.

﻿This week I also read about some new cognitive research being done on Down syndrome. Trailblazing at its finest...while I was trailblazing my way to the top of Green there are people out there trailblazing their way to a better understanding of what causes learning and memory impairment for people with Ds. Its unbelievable to think some of this research may have such a profound effect on James' life. 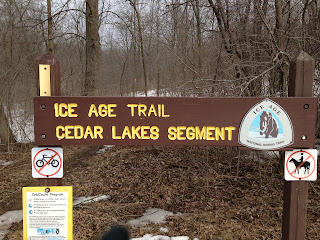